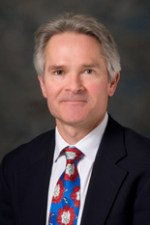 Dr. Eric Davis is an Associate Professor in the Department of Lymphoma and Myeloma at the MD Anderson Cancer Center in Houston, TX. He received his MD degree from the Medical University of South Carolina, then did an internship and residency training in Pathology at the Ohio State University and the University of California-San Francisco. After a fellowship in immunodiagnostics at Stanford University, he joined the faculty as an attending surgical pathologist, with a subspecialization in hematopathology. He then changed his career focus to research, joining the laboratory of Dr. Louis Staudt at the National Cancer Institute in Bethesda, MD, first as a postdoctoral fellow and then a staff scientist. While there, he participated in the groundbreaking study that used gene expression profiling to define the germinal center B-cell (GCB) and activated B-cell (ABC) subtypes of diffuse large B-cell lymphoma (DLBCL). His subsequent work showed the importance of the NF-kappaB pathway in ABC-DLBCL, and its activation via CARD11 mutations and/or chronic active signaling by the B-cell receptor, establishing new therapeutic targets like BTK that are being exploited with agents like ibrutinib. Since moving to MD Anderson, Dr. Davis has continued to explore the biology of B-cell receptor signaling in lymphoma, including in GCB-DLBCL, using CRISPR/Cas9 methodology and other techniques. He also specializes in the application of gene expression profiling and next generation sequencing to address questions in tumor immunology, response to therapy, and chemotherapy resistance.