Dr. Gaus grew up in Milwaukee and earned an accounting degree from the University of Notre Dame ‘84. 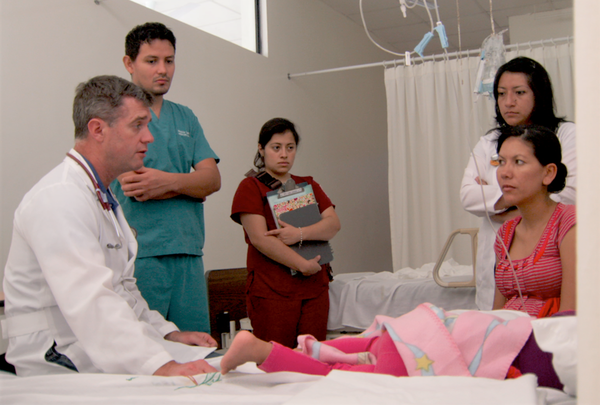 “How…the accounting major landed in Ecuador in the first place is a story in which Fr. Theodore “Ted” Hesburgh, Notre Dame’s president, played a central role. When Gaus confessed ambivalence over a future spent poring over numbers in his home state of Wisconsin, Hesburgh’s recommendation that David work with street kids in Quito fueled a fierce determination to return to Ecuador as a physician. How David accomplished this is a story as improbable as it is intriguing. As are specific events in Gaus’s life: meeting his Ecuadorian wife Elizabeth; bringing her to Wisconsin; having children; returning to Ecuador as a family after David completed medical school and tropical medicine training, and a family medicine residency [University of Wisconsin]; and, finally, in 1998, creating the nonprofit Andean Health and Development (AHD) with Hesburgh as its founding chair.