A chance meeting a decade ago in a graduate school hallway led paleoecologist Jason McLachlan to create a Jurassic Park-like wonder in Notre Dame’s greenhouse, where rows of salt marsh bulrushes have germinated from 100-year-old seeds.

Biological sciences graduate student Joshua Mason has been selected to attend the 2017 National Graduate Student Symposium (NGSS) at St. Jude Children’s Research Hospital in Memphis, Tennessee. Selection in the NGSS is extraordinarily competitive as application is by invitation only. Over 1,500 students were invited to apply for the 2017 symposium of which only 42 students were selected to participate. Mason and the other selected participants will receive an all expenses paid trip to St. Jude this Spring where they will give a talk, present a poster, and meet with St. Jude scientists. 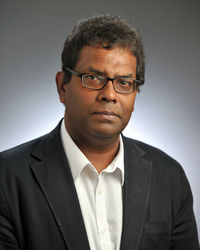 A collaborative modeling study among three research groups, including Edwin Michael’s laboratory in the Department of Biological Sciences, reveals that a triple-drug regimen could accelerate the elimination of lymphatic filariasis, a mosquito-borne parasitic disease also known as elephantiasis. The study, which shows that the regimen requires far fewer applications than current two-drug combinations, is also significant because it provides a unified scientific consensus on the subject for policymakers who sometimes face a confusing array of separate claims.

Research led by fifth-year graduate student Cheyenne Tait in the Biological Sciences laboratory of Jeffrey L. Feder at Notre Dame has identified structures on the antennae of Rhagoletis flies that could explain why the flies are on their way to diverging into two distinct species even though they are not geographically separated.