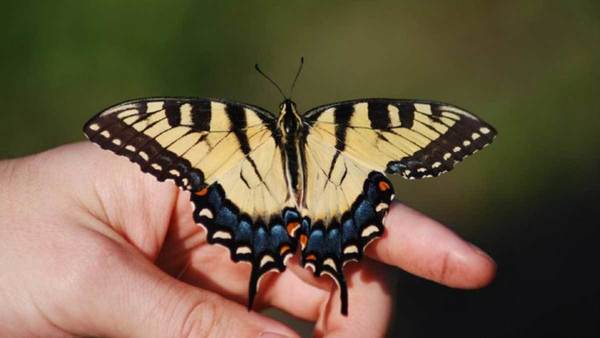 The reality of climate change poses a significant threat to global biodiversity. As temperatures rise, the survival of individual species will ultimately depend on their ability to adapt to changes in habitat and their interactions with other species.

A new study published in the Proceedings of the National Academy of Sciences examines movement of the Eastern (Papilio glaucus) and Canadian (Papilio Canadensis) tiger swallowtail butterfly over a 32-year period within the geographic region where the two species mate, called the hybrid zone. The findings highlight the impact of changing climates and provide critical information for the protection and management of biodiversity.

Researchers from the Environmental Change Initiative at the University of Notre Dame, Michigan State University and the University of Minnesota warn climate change can not only influence the geographic distribution of a species in response to changing conditions — it could also affect the evolutionary trajectories of interbreeding species.

“Climate change can alter the patterns of gene flow and change the interaction between species,” said Michael Pfrender, a co-author on the study, director of the Genomics and Bioinformatics Core Facility at Notre Dame and associate professor in the Department of Biological Sciences. “Changes in gene flow not only impact the fitness and survival of each species individually, but it can alter their genetic composition — what makes them distinct in the first place. If climate change results in a decrease of connectivity between the two species, they may become more distinct, and potentially useful genetic material will not move across the species boundaries.”

Researchers focused on documented warming over a 32-year period within the hybrid zone and measured movement over the same period, using molecular and morphological markers. They found the center of the hybrid zone had moved north nearly 40 kilometers (24.85 miles) at a rate of 1.25 km (0.77 miles) per year.

“Temperature is a key variable in determining how quickly individuals grow and how likely they are to survive to the next life stage,” explained Stuart Jones, associate professor of biological sciences at Notre Dame and co-author of the study. Through a sampling of historical specimens, detailed modeling and genetic data, the team was able to explore how climate variation interacts with reproduction, tracking development of a complete life cycle, from egg to butterfly, as well as growth at specific temperatures to estimate how many generations would develop under different climate conditions.

“We also made predictions for how the location of hybridization would continue to move northward and up mountainsides as the region’s climate continues to warm in the future,” Jones said. According to the study, researchers have predicted that the movement could range from 55-144 km (33-89 miles) per degree Celsius increase in temperature.

“Variability in how climate warms, the effects on those hybrid zones, and how the two species respond to those changes will determine the potential for gene flow,” Pfrender said. “Reductions in gene flow could lead of a loss of genetic variation, and as a result, one or both species could experience a reduction in population size and become threatened in its native range. Alternatively, a dramatic increase in gene flow could lead to the loss of unique qualities of each species as they merge together.”

The study’s results should encourage local conservation and management organizations to consider the influence of climate change on similar hybrid zones and the potential ecological and evolutionary impact.

“These results provide a roadmap for understanding and predicting gene flow and hybrid zones for species of concern under future climate change,” said Jennifer Tank, director of the Environmental Change Initiative at Notre Dame. “Successful prediction will require a powerful toolbox that combines understanding of ecology and evolution along with cutting-edge molecular and genomics techniques.”

The study was led by Sean F. Ryan, a graduate student in the Department of Biological Sciences at Notre Dame, who’s currently at North Carolina State University, and Jessica J. Hellmann, now at the University of Minnesota. Other co-authors include Scott Emrich at Notre Dame, Jillian M. Deines and J. Mark Scriber at Michigan State University.

Research was funded by the Notre Dame Environmental Change Initiative, the National Science Foundation and the University of Wisconsin-Madison Agricultural Experiment Station.

Originally published by Jessica Sieff at news.nd.edu on February 20, 2018.