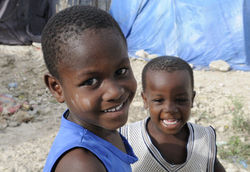 It’s a little more than an hour by car from the village of Léogâne to the Port-au-Prince office of Dr. Joseline Marhone, Haiti’s director of food and nutrition in the Ministry of Public Health and Population. It’s an instructive ride. The car is ventilated for passengers only by rolling down the windows, and then only when it’s moving, which isn’t as often as those accustomed to milder climates may like. Even in the city, the roads are winding, and the route seems devoid of right angles — indeed, of any angles at all. It’s a circuitous route to an unmarked destination. The office itself bears no markings of a government building. It’s literally a cargo container, roughly the size of a small semi-tractor trailer, with a hole cut in the side to accommodate a wall-mounted air conditioning unit, and a door affixed to a cut-out opening at the front.