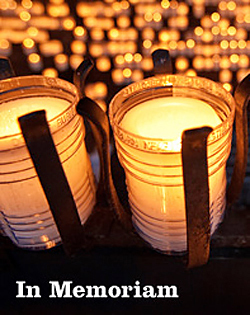 Robert P. McIntosh, a renowned ecologist and historian of ecology and wonderful husband, father and grandfather, died at 3:45 pm July 7, 2017.

He attended Lawrence College (now university) where he also played football and graduated in 1942 with a Bachelor in Science degree. He spent a summer collecting plants for Albert Fuller, Curator of Botany at the Milwaukee Public Museum.

During World War II he served from 1942-1945 in the Army in the Pacific Theater, Australia, New Guinea and Japan.

McIntosh attended the University of Wisconsin where he received a Doctorate of Science. He was a student and friend of Professor John T. Curtis, with whom he worked and co-authored groundbreaking studies based on analysis of plant communities in the prairie-forest border ecoregion of Wisconsin. The data was used to determine if plant communities exist in discrete, neatly ordered units or if they exist as a continuous series of overlapping species. They co-authored several influential scientific studies supporting the continuum theory of how plant communities are distributed across an ecosystem. An awards citation from the American Institute of Biological Sciences in 1998 said their papers contained “conceptual and methodological breakthroughs in the study of terrestrial plant ecology” that “changed the way in which ecologists look at plant communities.”

His book, The Background of Ecology: Concept and Theory, was published in 1985 and provided an unprecedented historical review of the development of ecology.

An awards citation from the American Institute of Biological Sciences in 1998 said these articles contained “conceptual and methodological breakthroughs in the study of terrestrial plant ecology” that “changed the way in which ecologists look at plant communities.”

He moved to the University of Notre Dame in 1959, where he taught until retiring in 1987, thereafter becoming a Professor Emeritus. He edited a scientific journal for many years, the American Midland Naturalist, beginning in 1970 until 2002.

In the earlier part of his career, McIntosh, and his family, enjoyed several summers conducting research and teaching at Michigan State University’s W.K. Kellogg Biological Station along Gull Lake. Also, four summers were spent hiking the Catskill Mountains of New York completing research on the forest communities there. Although teaching was a large part of his career, McIntosh once told a granddaughter that his work outdoors and in the field was one of the most enjoyable aspects of his career.

McIntosh authored and co-authored papers published in scientific journals including Science, American Scientist, The Botanical Review and others. One article titled “Plant Communities”, published in a 1958 issue of Science, highlighted McIntosh’s ability to succinctly and accurately summarize developments in the field of ecology. McIntosh drew from the work of numerous scientists as well as his own work and experience. He had a keen ability to summarize studies in ecology, describe sampling methods and provide a critical voice to analyze study results and techniques. In a 1963 paper published in American Scientist, McIntosh astutely reminded his audience that “reduction for the sake of simplification loses its point if the end is to delineate and demonstrate complexity. “Later during his stint as editor of the American Midland Naturalist, he wrote mostly historical reviews and general articles on theoretical ecology. With his writing, McIntosh thoughtfully summarized and contributed significantly to active debates within the world of community ecology.

His book, The Background of Ecology: Concept and Theory, published in 1985 by Cambridge University, reviewed the emergence of ecological thinking from before it became a recognized science into the 1970s.

Through his research, he has helped define the science of ecology in a modern sense.
Through his writing, he has added greatly to our understanding of the history of ecology.

He was Program Director for Ecology at the National Science Foundation from 1977 through 1978. From 1982 to 1985 he served as secretary of the Ecological Society of America.

McIntosh was named to the editorial board of Ecology, and became an associate editor of Ecological Monographs. He was elected a Fellow of the American Association for the Advancement of Science.

In 1992, he was awarded the Lucia R. Briggs Distinguished Achievement Award by the Lawrence University Alumni Association.

He is survived by his wife of 70 years, Joan, children Toby and Sarah, as well as five grandchildren and nine great-grandchildren.