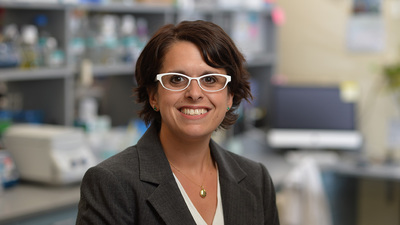 Tuberculosis-causing mycobacteria use a select group of proteins known as virulence factors to transmit the disease, which infects roughly one third of the world’s population and causes 1.7 million deaths annually. Those proteins are cargo transported by molecular machinery, a microscopic gateway that promotes the survival of bacteria in the host.

A new study by researchers at the University of Notre Dame and Michigan State University, published in the Proceedings of the National Academy of Sciences, reveals that mycobacteria can sense when this molecular machine is present.

“We’ve seen this in other types of bacteria but never in mycobacteria before,” said Patricia Champion, associate professor in the Department of Biological Sciences at the University of Notre Dame, which led the study. “Unlike other bacteria, which can detect the cargo proteins directly, mycobacteria can sense the transport machinery in the membrane and tune the levels of cargo proteins it transports accordingly.”

During the study, Champion’s team took aim at that machine and disabled it. Scientists have long known that this type of machinery is essential to cause disease in the host, but when knocking out one of the protein components, the team observed a surprising result. The entire structure fell apart.

“All the other proteins, they just weren’t there anymore and that was new,” Champion said. “And then we noticed a specific transcription factor went away inside the cell.”

Understanding what the sensing mechanism is and how it works could help researchers identify how to tone down the ability of mycobacteria to cause disease and help them in treating infection.

Originally published by Jessica Sieff at news.nd.edu on November 27, 2017.