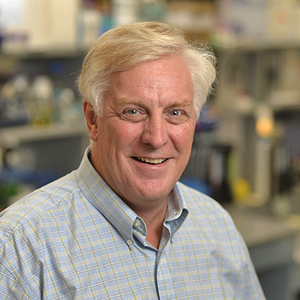 My lab studies regeneration of retinal neurons from resident Müller glia, which are a class of radial glia that acts as adult stem cells in zebrafish. This is in contrast to the damaged human retina, where the resident Müller glia undergo gliosis to initially slow further retinal damage and often results in a glial scar. Thus, understanding how the zebrafish regenerates lost neurons may lead to therapies to treat several human neurological diseases, such as macular degeneration and retinitis pigmentosa in the retina or Alzheimer’s and Parkinson’s disease.

In response to a variety of different damage models, the loss of retinal neurons induces the resident Müller glia to dedifferentiate/reprogram and reenter the cell cycle to produce a neuronal progenitor cell (NPCs) through asymmetric cell division. These NPCs continue to proliferate and migrate to the damaged retinal layer and preferentially differentiate into the neuronal class that was lost. Because these Müller glia-derived NPCs can differentiate into any type of retinal neuron, they must be pluripotent. Because the regeneration preferentially differentiate into the neuronal cell types that were lost and they are restored to approximately the same number that were lost, signals must stimulate the initiation of the regeneration response, regulate the extent of Müller glia and NPC proliferation, and communicate the type and number of retinal neurons that were lost.

My lab is exploring a number of transcription factors and signaling pathways that are involved in the initiation of Müller glia reprogramming and proliferation and NPC proliferation. We identified that dying retinal neurons produce tumor necrosis factor-alpha (TNFα) to stimulate Müller glia proliferation, while Notch, which represses Müller glia proliferation, must be attenuated. In fact, injection of TNFα and the gamma secretase inhibitor R04929097 (to block Notch signaling) is sufficient to stimulate nearly 90% of the Müller glia to reenter the cell cycle to produce NPCs that amplify in number and differentiate into retinal neurons, all in the absence of retinal damage. Thus, expression of TNFα and repression of Notch signaling are necessary and sufficient to stimulate a regeneration response. We also determined that Sox2 is required and sufficient for Müller glia reprogramming. These three proteins regulate the expression and activation of two transcription factors that are both necessary for Müller glia proliferation, Ascl1a (Achete scute-like 1a) and Stat3. While Stat3 is expressed in all Müller glia in the light-damaged retina, Ascl1a is only expressed in proliferating Müller glia. It is unclear what regulates the differential expression patterns of Stat3 and Ascl1a during retinal regeneration. Finally, the Hippo-Yap and NF-kB pathways play critical roles to initiate the regeneration response. We are very interested in the relationship of these different signaling pathways to properly regulate retinal regeneration.

Recently, we initiated a new project to examine the transcriptomics and epigenomics of Müller glia during the initial stages of retinal regeneration. Using FACS to isolate Müller glia in response to different damage models, and a combination of RNAseq and single-cell RNAseq, we are examining what are the common and different gene expression patterns to identify the general molecular mechanisms and the specific mechanisms required to regenerate different classes of retinal neurons. Using ATACseq to identify changes in the compaction of the genome, we are studying the relationship of chromatin changes with gene expression changes to reveal the potential transcription factors required for Müller glia reprogramming and reentry into the cell cycle. In collaboration with collaborators at Johns Hopkins School of Medicine, Ohio State University and University of Florida, who are performing analogous experiments in the chick and mouse, we hope to identify the molecular changes (both chromatin and gene expression) that allow Müller glia reprogramming and regeneration in zebrafish, but not in the chick or mouse. As we identify potential key candidate molecules, we will use a variety of genetic and cell biological approaches to test the function of each candidate in both zebrafish and mouse, with the goal of identifying a the necessary cocktail of expression changes that are required for Müller glia-dependent retinal regeneration in mouse and ultimately humans.

We also initiated a project to study the effects of blunt force trauma on the zebrafish brain. Focusing on the damaged cerebellum, we determined that the blunt force trauma results in the death of neurons, which are subsequently regenerated. Manipulating the force of the trauma allowed us to develop a mild, moderate, and severe damage models. We are currently investigating the source of the regeneration. In addition, we determined that the trauma results in both a learning deficit and loss of short-term memory, while long-term memory is not significantly affected. We intend to apply our knowledge of retinal regeneration to study the mechanisms underlying neuronal regeneration in the damaged brain.