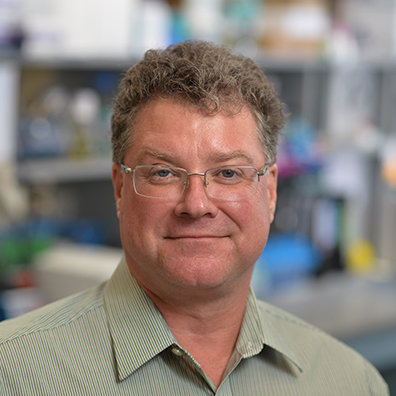 Dr. Vaughan is interested in the cell biology of human diseases, with an emphasis on cancer and neurodegenerative diseases arising from defects in organelle transport. A long-term project is focused on mitosis, the process by which cells segregate DNA into dividing daughter cells. Our particular strength is the use of mass spectrometry to identify novel regulatory events that control the progression through mitosis. Because most cancers arise because of errors in these pathways, our work on regulation and therapeutic approaches overlaps with the mission of the Harper Cancer Research Institute.

Our research into regulation of mitosis stimulated another larger project in which we collaborate to identify novel combinatorial drug treatments for cancer. One exciting new drug combination kills tumor cells through a novel mechanism that has not been pursued previously. We are testing this drug combination in animal models of pancreatic and breast cancer.

As part of Notre Dame’s efforts to cure Niemann Pick Type C (NPC) disease, the Vaughan laboratory has discovered a new mechanism of cholesterol transport and determined that mutations in NPC disease perturb this process. We are investigating other components of this new pathway that have the potential to correct the NPC defects and improve the outcomes for NPC patients.