Cody Smith, a researcher in the University of Notre Dame’s Department of Biological Sciences, has been granted a highly competitive National Institutes of Health Director’s New Innovator Award that will allow him to perform bold research that has the potential to impact a broad area of science. 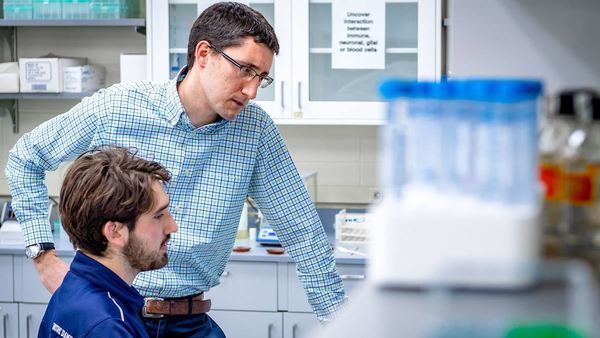 Cody Smith chats with a graduate student in his lab. Photo by Matt Cashore/University of Notre Dame.

The award, established in 2007, supports unusually innovative research from early-career investigators who are within 10 years of their final degree or clinical residency. Smith, the Elizabeth and Michael Gallagher Assistant Professor of Biological Sciences, is among 60 early-stage innovators to have received the honor this year.

Smith’s research will focus on the study of glial cells, which are non-neuronal cells in the central and peripheral nervous systems. The $1.5 million he received provides him freedom to develop any type of experiment over five years that advances the understanding of how the diversity of glial cells contributes to the function of the nervous system.

“I am grateful and humbled for the opportunity to be selected for this New Innovator Award,” Smith said. “Even though my name is on the award, it is really the exceptional hard work and talent of the people in my lab that provided this opportunity. I am excited to see what we can discover together.”

“The NIH Innovator Award supports exceptionally creative, innovative, high-impact projects. We had two such awards in the department previously and now Cody Smith has brought us yet another. It is testament to the quality and prowess of our junior faculty,” said Crislyn D’Souza Schorey, the Morris Pollard Professor and Chair in the Department of Biological Sciences. “I am immensely proud of their accomplishments and the remarkable ways in which they contribute to the University’s mission.”

Smith graduated with a bachelor of science in biology from Mercyhurst University, and earned his doctoral degree in cell and developmental biology from Vanderbilt University in 2012. He was a postdoctoral fellow at the University of Virginia until 2016, when he was hired at Notre Dame. In 2017, he was named the Alfred P. Sloan Fellow of Neuroscience, another prestigious award given to the next generation of scientific leaders.

In addition to the New Innovator Award, Cody was awarded a two-year, $80,000 grant from the Indiana Department of Health to study brain and spinal cord injuries. Specifically, his research will try to understand how nerves regenerate after spinal cord avulsions.

Originally published by Deanna Csomo McCool at news.nd.edu on October 02, 2019.