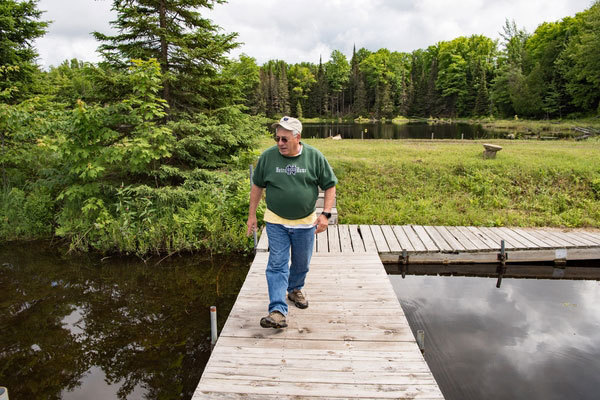 In the United States, the Great Salt Lake in Utah is home to a multimillion dollar brine shrimp industry, which collects and sells the brine shrimp cysts, or eggs, as a food source for prawn farming around the world. However, the GSL and brine shrimp are also a key resource for waterbirds during migration and nesting. To balance the needs of the animals and the industry that rely on brine shrimp cysts, a University of Notre Dame researcher and the Utah Division of Wildlife Resources (UDWR) completed a study over 20 years to evaluate and improve management of the GSL.

In the 1990s, concerns emerged about how the harvesting of brine shrimp cysts was affecting the needs of waterbirds that annually utilize the GSL. In 1992, the State of Utah began requiring harvesters to purchase a license to better monitor the industry. Then, just four years later, a formal harvest management system was finally put into place after an emergency closure of the cyst harvest season, which was necessary to protect the lake’s ecological system.

“I began studying the GSL in 1994 with the UDWR before any harvesting limitations had been set,” said Gary Belovsky, Gillen Director of the University of Notre Dame Environmental Research Center and professor of biological sciences. “Due to our timing and expertise, our research team had a unique opportunity to develop a management strategy, see it eventually implemented through policy, and realize the benefits of adaptive management to conservation and industry in real-time.”

Belovsky and W. Clay Perschon from the UDWR were tasked with monitoring the GSL and collecting data about the ecology of the lake, its inhabitants, and the waterbirds that rely on it. Nearly a third of all western birds in the United States nest or migrate through the GSL, including more than two-thirds of the Eared Grebe bird population, which primarily eat brine shrimp.

In 1997, researchers developed a model to project how many cysts should be left unharvested so that enough cysts would be left to hatch the next spring to feed the waterbirds. The model uses adaptive management, meaning that each year the model is improved based on a number of factors and results from that year’s particular harvest and brine shrimp population. By implementing this type of management system, the State of Utah prevents overharvesting, which could deplete the brine shrimp population beyond repair.

“Although overharvesting can hurt waterbirds, when unchecked it could also cause the productivity of the brine shrimp populations to sharply decline for the harvest industry. This would make it difficult for the GSL to recover and has been detrimental at other locations where brine shrimp were harvested,” said Belovsky. “While conservation of brine shrimp with the adaptive management plan is important ecologically, it is also critical to sustain the brine shrimp industry for the State of Utah’s economy.”

Although Belovsky turned over the harvest model to the State of Utah in 2014, the state continues this management system today.

The study titled “A Management Case Study for a New Commercial Fishery: brine shrimp harvesting in Great Salt Lake” was published in Ecological Applications and was funded by the UDWR as well as supported by the Great Salt Lake Technical Advisory Group, a state advisory group that reviews lake health and research.

Originally published by Brandi Klingerman at research.nd.edu on March 05, 2019.