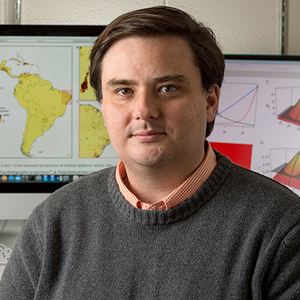 Alex Perkins, Ph.D., Eck Family Assistant Professor in the Departments of Biological Sciences and Applied and Computational Mathematics and Statistics, and a member of the Eck Institute for Global Health, recently published a study looking at behavior of patients with one of the most common symptoms of disease: fever.  Surprisingly, the impact of this common disease symptom on the mobility and contact patterns of an infected person is rarely studied and “seldom accounted for in mathematical models of transmission dynamics.”

As the leader of this study, Perkins and colleagues examined the mobility of two groups of residents, those with and those without dengue fever, in the Amazonian city of Iquitos, Peru.  The study’s results are published in the Proceedings of the Royal Society B.

“Although the fact that fever impairs one’s mobility is not all that surprising and something we can all relate to,” states Perkins, “it’s something that has surprisingly not been studied that much and that is rarely incorporated into mathematical models in epidemiology. Our results show that this phenomenon really does have a profound impact on people’s behavior when they’re sick, potentially in somewhat complicated ways that depend on the person.”

Research in the Perkins Lab applies mathematical modeling to the study of infectious disease transmission dynamics and control, with a focus on mosquito-borne diseases such as dengue and malaria. The study showed that a sick patient not only has inhibited mobility, but that a sick person may even go somewhere they do not typically visit. This could have implications for Perkins’ mathematical modeling when studying transmission dynamics and control of infectious, mosquito borne-diseases such as dengue fever.

Dengue fever is a mosquito-borne disease mainly found throughout the tropics that is associated with painful and debilitating symptoms.  An estimated 390 million dengue infections occur worldwide each year, with about 96 million resulting in illness. Most cases in the United States occur in people who contracted the infection while traveling abroad. But the risk is increasing for people living along the Texas-Mexico border and in other parts of the southern United States.

The Eck Institute for Global Health recognizes health as a fundamental human right and endeavors to promote research, training, and service to advance health standards for all people, especially people in low-and middle-income countries, who are disproportionately impacted by preventable diseases.

The University of Notre Dame is a private research and teaching university inspired by its Catholic mission. Located in South Bend, Indiana, its researchers are advancing human understanding through research, scholarship, education, and creative endeavor in order to be a repository for knowledge and a powerful means for doing good in the world.

Originally published by Sarah Craig at globalhealth.nd.edu on July 13, 2016.