The University of Notre Dame Summer Undergraduate Research Program at MD Anderson is a competitive program designed for outstanding and highly motivated undergraduate students interested in pursuing a career in cancer research. Students participated in various types of research in different labs, attended lectures and presentations, and collaborated with others as they fostered their interest in a research career path. 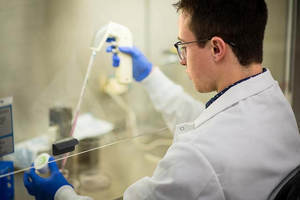 Colin Sheehan, a junior biological sciences major who worked in the Department of Cancer Systems Imaging at MD Anderson, studied how to create a small molecular probe that could improve the diagnosis of glaucoma, a common degenerative eye disease. Though there are several diagnostic tests for glaucoma, none directly measure the underlying cellular process of the disease, Sheehan said. The molecular probe addressed that issue because it’s activated by a specific enzyme, called caspase-3, around the dying cells. Certain clinical imaging technologies can detect the activation.

“Something I really enjoyed about this experience was we occasionally had these very large departmental meetings—researchers will rotate in presenting what they’re working on and the rest ask questions or offer critiques. It’s a neat opportunity to see the environment, talk to people, and learn about all the cool work happening there,” said Sheehan. 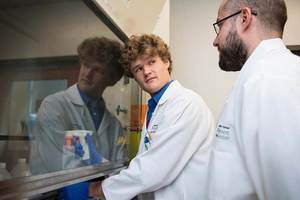 discovery of biomarkers for the diagnosis and early detection of cancer. He studied if and how cancer cells reduce the number of active T cells—a subtype of white blood cells that play a role in the immune system—that are attacking the tumor. He also looked at how tumors “hijack” the body’s normal immune processes, reducing immune responses and promoting tumor growth.

“The most valuable aspect of my time was seeing how research works in a professional setting, and I have really enjoyed working on something that matters, and that I know will be used by our lab in the future,” Davitt said.

“Students who would like to land an internship at MD Anderson next summer should start thinking as soon as possible about which researcher they would like to work with at the center,” he said.